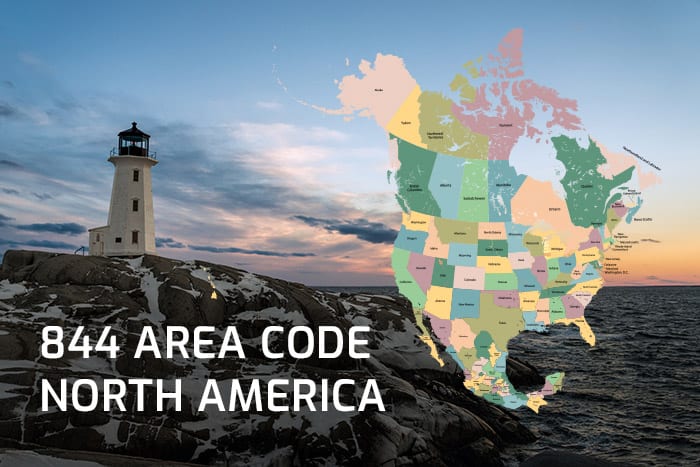 A phone number with an 844 area code is a common sight in North America. And this is because this number is a toll free number for the country, making businesses in the region more accessible to residents. This number serves businesses and corporations in Canada, the United States, and countries in the Pacific and Caribbean located within the North American continent.

An 844 area code number is not a geographic area code code but is primarily used in the United States, Canada, and countries in the Pacific and Caribbean that fall under the North American continent. This includes popular states in the US like New York, California, Texas, Florida, and Canadian metropolitan areas like Toronto, Vancouver, and Montreal.

844 is a US toll free number that charges the receiver instead of the caller. This makes it an ideal contact number so that customers can connect with an enterprise without paying any fees. These numbers start with a distinct three-digit code, namely 8XX. 800 was the original toll free number but because of a growing need of toll free numbers for businesses, the North American Numbering Plan (NANP) had to create more toll free codes. The 844 area code toll free number came into existence in 2013, as a result. Other toll free codes are 800, 888, 877, 866, 855, and 833.

Getting a toll free 844 area code number for your business will open a free way for customers to contact you. And since they don’t have to pay any extra fees, even for long-distance calls, they are more likely to make those phone calls. And since toll free numbers are generally associated with large, successful corporations, your company can develop a similar professional image.

But more importantly, toll free numbers with call forwarding services—that is, they forward incoming calls to numbers of your choice—can give you the benefit of additional communication tools. For example, when you purchase a toll free business number from United World Telecom, you get to use features like:

These tools can be used to further solidify your company’s image as well as provide customized caller experience to clients reaching out to your service.

The continent is surrounded by the Arctic Ocean in the north, Atlantic in the east, Pacific in the west and south, and South America and the Caribbean Sea to the southeast. Canadian regions that fall under North America:

The United States regions that come under this continent are:

Because of the geographic range of this area code, it comes under various time zones. The western states of the US follow Pacific time (UTC–8). The eastern states, on the other hand, follow Eastern time (UTC–5). States in the Midwest follow Mountain time (UTC–7) and central states follow Central time (UTC–6). Lastly, Alaska follows Alaska standard time (UTC–9). Keeping track of all the time zones can be difficult. However, it is good to be aware of what time zone companies or potential customers are in.

Getting an 844 Area Code Number

A 844 number is a US toll free phone number with the toll free prefix 844. This means that callers dialing this number are not charged for the call.

Yes, a 844 number is a US toll free number that is free to call. The charges are incurred by the receiver instead.

A toll free number is a business phone number that charges the receiver of a call instead of the caller. This means that customers can call your business for free if you have a toll free business number.

A toll free 844 number means that customers can call your business for free without paying any calling charges. This is a great way to increase customer calls and improve customer service.

How To Get Started

Sign Up Online, Instantly
Or
Request a Custom Quote

A reliable suite of included and premium features to power your business communications.

The Most Trusted Provider of Business Phone Numbers

Service quality and customer experience are our top priorities.

150+
Countries
Phone numbers available across the globe.
24/7
Support
Reach us via phone, chat, website, and email.
25+
Years
We've been in business since 1996.
99.999%
Uptime
Multiple layers of redundancy = Higher reliability.