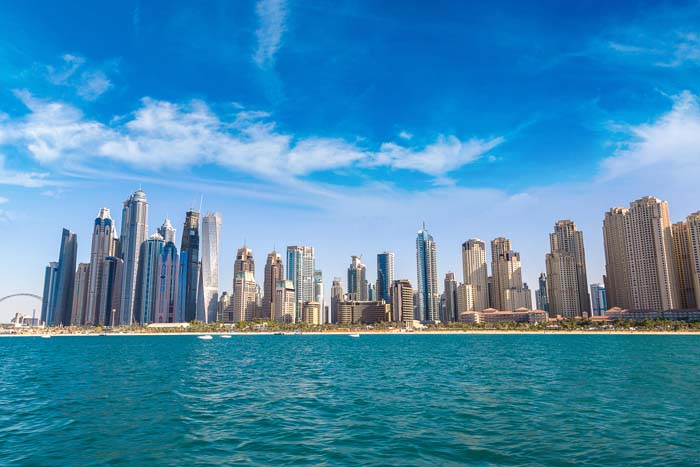 The United Arab Emirates is located at the southeastern tip of the Arabian Peninsula on the Persian Gulf. It borders Saudi Arabia and Oman. The nation is a federal sovereign monarchy and is comprised of seven emirates which include Sharjah, Ajman, Abu Dhabi, Ras al-Khaimah, Dubai, and Umm al-Quwain. Each of the Emirates is governed by a separate rule, who together form the Federal Supreme Council.

The UAE holds one of the largest economies in the Arab world. Of all the countries in the Gulf Cooperation Council, UAE is the most diversified. With the exception of Dubai, most of the Emirates are reliant on oil revenues, though natural gas and petroleum play important roles in the economy as well. One of the other main industries in the UAE is tourism. Some of the most luxurious hotels in the world are located there. A rapidly growing construction industry and manufacturing base are further helping to diversify the nation’s economy.

Many overseas companies are attracted to doing business in the UAE, and it’s easy to see why. Thanks to a liberal trading system, economic growth has remained stable.

By the World Bank’s standards, doing business in the UAE is considered to be a fairly simple process.

Political and economic reforms have resulted in an efficient and smooth-running regulatory system that allows flexible employment regulations. Compared to surrounding countries, the UAE is considered to be one of the least corrupt regimes.

Businesses in the Emirates tend to be family-based and driven by familiar relationships. You should bear this in mind if you intend to have business partners or employees based in the UAE. When speaking to customers, you should always maintain a respectful and polite attitude.

E-Commerce in the UAE

Of all the countries in the Gulf Cooperation Council, the UAE is the e-commerce leader. The nation’s e-commerce market is currently valued at over $10 billion and is expected to increase to $20 billion by 2019. There is a strong internet and mobile presence throughout the UAE, which has played an active role in the growth of e-commerce.

So, what are online shoppers in the UAE buying? Surveys show that the most popular purchases include travel products and services and entertainment, such as event tickets. Also popular are fashion items and IT and mobile products.

The fact that more than two-thirds of UAE consumers enjoy shopping online makes this a lucrative market for e-commerce traders. If you are selling your products and services online, you may want to jump into this market before your competitors do. But how can you do this if you’re not located in the UAE?

How United Arab Emirates Virtual Numbers Can Help your Business

It’s much easier than you think; all you need are the United Arab Emirates virtual numbers. Virtual numbers are ones that operate via the internet instead of being linked to a physical phone line. All the data is stored in the cloud, which means you can control how your numbers work from wherever you are by using the online console.

When your customers call your United Arab Emirates virtual numbers, incoming calls are routed to the number or numbers of your choice. For example, you could have calls directed to your smartphone, your office line, your customer call center, or even your hotel room.

Can I have more than one United Arab Emirates virtual number?

One of the main benefits of getting your United Arab Emirates virtual numbers from Global Call Forwarding is that you can have toll free and local numbers at the same time. Once you have decided which one works best for you, you can make the necessary changes.

Do I own my United Arab Emirates virtual numbers?

Yes, you own all your virtual numbers as long as there is no outstanding balance on your account.

What will my callers hear when they dial my United Arab Emirates virtual numbers?

Global Call Forwarding connects your calls very quickly. While the caller is waiting, he or she will hear a local ringback tone. It will be no different than if they were calling a number in their own country.

Can I have my calls forwarded to more than one number?

You can. In fact, there are several options for having calls routed to more than one number, including sequential calling, simultaneous calling, and failover forwarding.
Call us today to find out more about all these great options and start a free trial.